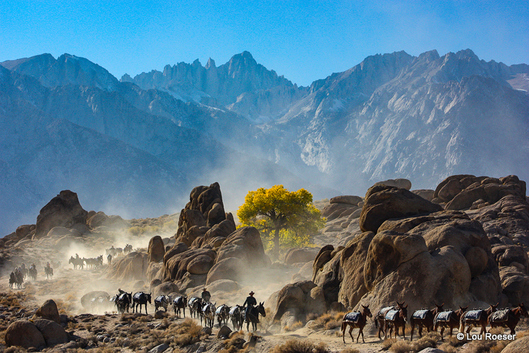 100 Mules on the trail, Mt. Whitney in the background. Photo by Lou Roeser.
History of the Mount Whitney Trail

Mt. Whitney, located in the long Sierra Nevada Mountain Range of California, is the highest mountain peak in the continental United States outside of Alaska.  The peak is part of a massive granite wall that stretches fifteen miles from Mt. Tyndall, in the north, at 14,024 feet to Mt. Langley in the south at 14,042.  Mt. Whitney, at latest measurement is 14, 505 feet in elevation and there are a dozen peaks in this section of the Sierra that are over 14,000 feet.  Whitney Portal, the trail head lies at 8, 367 feet elevation and it is approximately 11 miles to the summit.  The trail, although steep, was constructed as a stock trail and is reasonably wide and gradual.  The summit is three or four acres in size and almost flat.  Glaciers cut and sculpted the sheer east face of the mountain that is viewed from Lone Pine.

Mount Whitney, was first climbed in 1873, by local fishermen from the Owens Valley towns of Lone Pine and Independence.  Soon after this first feat, miners from the mining town of Cerro Gordo near Lone Pine made the climb, again from the west side.  While camping along the Kern River, both of these early climbers rode their horses up from Crabtree Meadows, Soda Creek and the Kern River as far as possible, and then scrambled up the remaining about 2 mile distance.  The sheer eastern face was considered too difficult, so residents of the Owens Valley packed into the Kern River from Onion Valley and over Kearsarge Pass via a long dogleg route.  Others visitors traveled the even longer distance from the west side of the range out of the central valley town of Visalia.  Clarence King of the California Geological Survey thought he had been the first to climb Mt. Whitney in 1871 but had actually climbed Mt. Langley.  After learning of his mistake and the two previous actual climbs, King hurried to Visalia, hired a commercial pack outfit, and with a companion, became the third party to climb the mountain.  John Muir, hiking alone from Independence, became the 4th all in 1873.  Muir pioneered a route called “the Mountaineers Route”.

Local Owens Valley citizens realized that they needed a better passable access trail from the town of Lone Pine that was situated directly 10,000 feet below the peak.  This was the sheer east side of the Mountain.  Part of the selected route had first been climbed by John Muir in 1873 who lined out the “Mountaineers Route” by way of a north facing gully.    A narrow foot trail had been eked out in 1881, but the upper trail was not safe for riding and pack animals.

The town of Lone Pine raised money to build a good trail to the summit of the mountain and in 1904, Gustave F. Marsh was contracted to engineer and build such a trail to the top of the peak.   The Olivos Pack Train, an early commercial packing business, owned by Carmen Olivas, packed all of the supplies and tools for the project on sturdy mules.  The trail was completed and opened on July 22, 1904 with much celebration of this construction achievement.  A string of pack mules carrying firewood was led to the summit and a large bonfire was set on the summit.  This visible fire was a signal to the townsfolk of Lone Pine that the trail was completed and was passable for horses and mules.    Just four days later, three employees of the U. S. Fisheries were at the top and sitting down eating their lunch when a bolt of lightning struck them and killed Byrd Surby.  The other two employees survived.

Scientists were using Mt. Whitney for high altitude testing as it was the highest spot in the United States for their tests and after the death of Surby, a stone shelter was proposed.  Gustave Marsh was again contracted in 1909 to construct a stone shelter at the top.  Funding for the building came from the Smithsonian Institution and the Lick Observatory.  Its location is on the west side of the summit plateau.  Olivas Pack Train again packed supplies and Archie Dean along with Garth Goodly were young packers hired to pack all the needed supplies.  Archie later owned High Sierra Pack Trains out of Independence.  The 11 x 30 foot rock structure is constructed of granite rock and mortar with a roof of corrugated steel on a steel truss frame.  No wood was used in the construction.  There are three rooms in a line with windows in each and a door each on the north and south rooms.  It took only a month for Marsh and his crew to complete the building.  This was quite an accomplishment considering the high altitude and simple tools available for them to use.  The Smithsonian Institution immediately equipped it with a telescope.
In recent years the Forest Service has warned hikers not to use the shelter during lightning storms as the corrugated steel roof has proved to be a lightning rod and strikes have killed several persons inside of the building.  The Mt. Whitney Summit Shelter is listed on the U. S. National Register of Historic Places.

By 1947, the Mt. Whitney Trail was overdue for serious maintenance and reconstructions.  Henry Thorne was the Forest Engineer in Charge of construction for the Forest Service.  The project included rebuilding the section of the trail from Consultation Lake to Whitney Pass including the infamous 96 switchbacks.  It was necessary to reroute part of the trail up a sheer granite wall in order to avoid deep snowdrifts that often buried parts of the trail most of the summer.   Relles Carrasco was foreman of the hardy 12-man trail crew and his wife, famous for her backcountry meals, was the cook.

The Forest Service contracted with the Mt. Whitney Pack Train to haul all equipment and supplies for the project and the camp at the 12,000 foot Trail Camp location.  Packing the heavy equipment, dynamite, supplies and firewood, required four strings of five mules each, up the trail almost every day.  Regular sawbuck packsaddles could not be used to pack the heavy machinery and equipment so aparejo saddles were put into service.  At that time, there were still a number of qualified packers who had the experience and technical skills to pack these heavy loads on aparejo saddles.  One string of mules carried the camp supplies and necessities up the trail almost daily.  Since the camp was well above the tree line, wood to supply the cooking  fire, as well as heating fires for the cool nights, had to be packed up to the camp.

A heavy Schramm air compressor that weighed 10,000 pounds had to be taken apart and then reassembled up at the work site along with 1,500 feet of pipe to transport air to the compressor.  The compressor was used to power the rock drills.  The heaviest piece was the crankshaft that weighed 344 pounds and had to be carried in one piece on one mule.  Presumably, that mule was a large, sturdy, draft type animal!

The often-hazardous project took two summers to complete.  In working on the steep cliffs, the men had to be secured with ropes.   The Forest Service trail crew completed a major new trail alignment and construction safely in early September.  A new pass was constructed, Trail Crest Pass, with 99 switchbacks in a 2.2 mile section leading up to it.  The old pass, Whitney Pass, to the north, was abandoned.  Trail Crest Pass is the highest trail pass in the United States at 13, 650 feet and is 2.5 miles to Mt. Whitney from its crest.  The pass lies at the foot of Mt. Muir (named after John Muir) whose elevation is 14,015.  Henry Thorne later reminisced that, “If it hadn’t been for mules, the whole job couldn’t have been done at all”.

On September 8, the first pack trip party to use the new section of the trail was the Wilderness Riders of America packed in by Mt. Whitney Pack Train.  The party, including pack station packers and cooks, Forest Service personnel and Club participants, numbered 35.  The number of animals was at least 70 head of horses and mules.

Packers loose herded their pack mules from Trail Camp, the highest camping area on the trail, westward up and over Trail Crest Pass at 13,777.  People could ride a horse to the summit.  The distance from Whitney Portal to the summit of Mt. Whitney one way is about 11 miles.
When Mt. Whitney Pack Trains operated trips out of Whitney portal, young packers early in the season, were sent up to shovel the 99 switchbacks of snow and ice.  Packers would load shovels and pick axes on their mules and lead their mule strings to Outpost Camp to camp overnight.  In the morning, the hardy young men would move up three more miles to Trail Camp, tie up the mule strings, unpack their shovels and pick axes and begin shoveling.  This is snow shoveling beginning at 12, 000 feet which is no easy task!  With spring storms on the high trail, it was sometimes snowing on the shovelers as they were working.

In about 1972, the Forest Service closed the Whitney Trail to pack and saddle stock making it a hikers only trail.  When pack and saddle stock were no longer permitted on the trail, this trail opening service ended.  Hikers, early in the season, are now advised to carry crampons and ice axes.  At Whitney Portal, the corrals and pack station were removed as were the camp facilities at Outpost Camp.  The store and café remain are still in operation serving visitors.

In 2012, the Forest Service completed critically needed maintenance and repairs on the heavily used trail.  The Mt. Whitney Trail had not been worked on for some time and massive amounts of equipment, tools, and provisions and supplies for camp for the 10 person trail crew had to be carried up by Forest Service pack mules.  Forest Service packers, Michael Morse and Lee Roeser, determined that only mules would be used for both saddle and pack animals as the trail had not been maintained for horse and mule access since it had been closed to stock in 1972.  These mules were selected especially for their surefootedness.  All trash generated had to be hauled back down the trail the same way.  Because of heavy hiker use, the construction work was made even more difficult and Forest Service personal had to be so called traffic directors. The trail crew spent from June 18th through October 2nd working on the trail.

Over 20,000 people hike on the trail each year and it is the most sought after peak in North America.  Because of popular demand, hikers must secure a permit through a lottery system from the Forest Service in order to climb the Mt. Whitney.  Of the many hikers who climb the trail daily today, few are aware of the enormous difficulties in constructing and maintaining that famous trail and even fewer know of the essential part played by the humble pack mule.
American Mule Museum
PO Box 395
Bishop, CA 93515
info@mulemuseum.org