The Role of the U.S. Cavalry in Building the Mt. Whitney Trails in 1903
by Marye Roeser 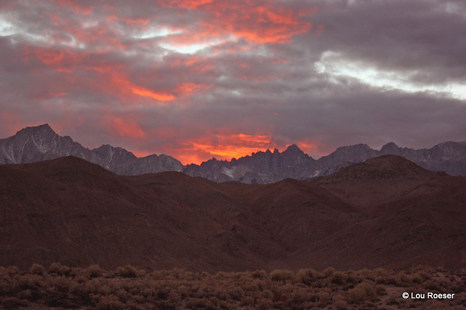 Mt. Whitney Sunset - Photo by Lou Roeser
The much treasured Sequoia and General Grant National Parks were created by the U.S Congress in 1890. However, no funds were appropriated. The Parks’ management was assigned to the Department of the Interior and the mission of the parks was stated as “protect a natural condition” and “promote a pleasuring-ground”. The Interior Department approached the Dept. of War for assistance and in 1891, the War Dept. assigned cavalry troops to protect the parks each grazing season. In 1900, following much pressure from the public, Congress began to appropriate $10,000.00 each year to improve visitor access to the parks.

On April 21, 1903, Capt. Charles S. Young of the 9th Cavalry Regiment was appointed Acting Superintendent of the Parks following the illness of Capt. Lester W. Cornish. On May 20, Troops I and M, with 93 mounted enlisted soldiers and 3 officers with at least that number of horses, pack mules, 20 draft mules and 4 escort wagons, proceeded overland from the Presidio in San Francisco. They camped out each night along the route and trailed to Visalia, arriving there on the 2nd of June. From there they rode on to Three Rivers a distance altogether of 323 miles. It took them 16 days averaging 20 miles a day. Setting up a base camp on the Three Rivers ranch of Broder and Hopping, their first priority project in the parks was to reconstruct an old wagon road and extend it in the Sequoia “Big trees”.

Captain Young had already sent out an advance detachment of 15 soldiers under Lt. Howard to the meadows near Mt. Whitney to cut off early season access of the sheep flocks from the east side of the Sierra Nevada Mountain range. Lt. Howard established a summer base camp near the meadows below Mt. Whitney, a rough 75 mile trip through the Sierra wilderness with mule pack strings carrying their camp and supplies. Lt. Howard was assigned the job of cutting off early access of the sheep herds from east side entry into the lush meadows. The meadows in previous years had been heavily grazed so there was little feed for tourist’s riding and pack stock. Exploration and tourist parties complained of the lack of grazing for their stock because of the sheep herds and making their trips even more difficult. The soldiers successfully accomplished this task and feed was plentiful this year of 1903.

The cavalry soldiers were also detailed to construct a trail from a lake, now known as Guitar Lake, to the top of Mt. Whitney at current height of 14, 505 altitude. An older 1896 map shows a trail ending at Guitar Lake. Trails so constructed were built as stock trails when possible as everyone rode horses or mules and mule pack strings carried the necessary supplies and equipment for the long trips. Mules were considered more sure-footed on these high rocky granite routes.

Capt. Young with a detachment, arrived in the trail camp shortly after July 11 to relieve this early detachment. This detachment, under Lt. Howard, were then sent to Lone Pine on the east side of the range to build an eastside trail to the top of Mt. Whitney. They perhaps used the Hockett Trail to pack from the Kern River Canyon to Lone Pine, another difficult journey.   Young spent about a month in the Whitney area, inspected the trails to make sure they were cleared of snow to the top of Mt. Whitney, probably climbing to the summit of the 14, 505 foot high grand mountain and he described the country as the grandest he had ever seen.

The 1903 3rd Annual Sierra Club Outing of 143 members plus a large support staff were base camped on the main Kern River where Coyote Creek joins the river. After an arduous journey to Three Rivers, the Club members were packed in from Three Rivers with pack strings by Broder and Hopping Co., local commercial packers. Many of the Club members hiked while others rode horseback to the Kern River camp. The Club arrived in the base camp for their summer sojourn on June 27. Broder and Hopping had prepared Captain Young and the army for the large Sierra Club trip and intention to climb Mt. Whitney. Members left the main camp to climb Mt. Whitney about July 10 and 139 (including women) climbed to the summit. The Sierra Club leadership and Broder and Hopping no doubt had pressured the Army with their concerns over adequate stock grazing and trail conditions.

Meanwhile, Lt. Howard and his detachment of 15 men began trail work just outside of Lone Pine. They were joined by Lone Pine men – Ed Cross, F. Harvey and Fred and R.C. Speare. The camp and supplies were packed in by the Army pack mule strings. The cavalry detachment continued work on the eastside access trail until they were withdrawn for the season probably about October 1st. A celebration had been announced for Oct. 17th as the trail was expected to be completed by Oct. 1st. However, the upper part of the trail was slower going than they anticipated and they did not have dynamite for the needed blasting into granite rock. Capt. Charles Young and Capt. L. Cornish were in Lone Pine in September and were actively trying to raise private funds to continue the trail work to the summit. The town of Lone Pine organized a team of 12 men with a foreman and with assistance from a local commercial pack station, made a camp at the upper lake now known as Consultation Lake under the eastern face of Mt. Whitney. They continued work on the trail until cold weather and storms forced them to stop for the 1903 season.

On Nov. 3, 1903 the 9th cavalry Troops I and M, were in Visalia marching through town in a celebration parade followed by banquets for them put on by the local citizens. The troops were honored by the citizens of Three Rivers and Visalia for building the first wagon road into the park and building the first trail to the top of Mt. Whitney. This was a remarkable accomplishment directed by Capt. Charles Young during the one season he was stationed at the two parks. The regiment then rode back to the Presidio in San Francisco, camping along the way, and resumed their winter duties.

In 1904, Gustave F. Marsh, of Lone Pine, was awarded a contract to complete the trail to the Summit. He organized a Lone Pine trail crew who began their work at Consultation Lake at the head of Lone Pine Canyon at the location now known as Trail Camp. There were a little over two difficult miles to the summit to complete before the east side trail would join the west side trail built the previous summer. It was completed by July 17th and the celebration was held in Lone Pine. The first USGS map published in 1907 shows this trail.

The published stories of the event in the eastside newspapers, has the eastside Mt. Whitney Trail built and financed by the citizens of Lone Pine and indeed they did complete it. However, there is no mention of the remarkable contributions and work accomplished by the 9th Cavalry, Troops I and M, (fondly called the Buffalo Soldiers) during the summer of 1903 and directed by Capt. Charles Young, the highest ranking of only 3 other black officers in the U. S. Army.