In earlier years, at pack stations in the Sierra Nevada, packers sometimes “loose herded” home when they were returning to the station from a distant destination. What that meant in layman’s jargon, is that the packer had packed a spot or dunnage party trip to a lake or river campsite, dropped off the party with their gear, and was returning empty (empty packs on the mules and no riders on the horses) to the pack station.

At our Mammoth Lakes Pack Outfit, after the packer completed unpacking his party, he then had to prepare all of the animals and their gear for the return trip empty. First, he reset the riding saddles and pads on the saddle horses, cinching them well so the saddles would not turn or slip, tied up the bridle reins to the saddle horns. Next, he tied down the empty pack boxes and bags so the ropes would not loosen or packs dislodge and adjusted pack pads. The packer always readied his own saddle horse first and tied that horse securely to a stout tree while he completed preparing the rest of the pack mules and saddle horses. If he was careless in these chores, his problems would festoon the trail for all other packers to observe and snicker over. No top hand wanted to return home minus various saddle pads, boxes, bridles, etc. with ropes dragging or gear along the trail for other packers to collect along the trail.

When all of the animals were readied, the packer would begin untying the stock and securely tying up their lead ropes. He surely didn’t want his stock to stop and graze or arrive in the yard dragging their lead ropes! The last step was to untie his own trusty steed, make a hasty mount and try to get in the lead of the bunch heading for home. He planned to set an easy,, constant pace and not bring the stock into the pack station hot and sweaty. If there was more than one packer, one would ride in front and one in the rear. But, if the packer was by himself, he had to work doubly hard to keep the herd following behind him.

Lou Roeser, my husband and owner of the Mammoth Lakes Pack Outfit, had one of those “returning empty” trips from Purple Lake after a particularly long day. It was a typical busy August day with many trips packing in. Lou helped get all his other packers out with their trips, so his trip was the last to leave the pack outfit yard. He reached Purple Lake and unloaded his party in a beautiful campsite at the upper end of the lake, then tied up packs and prepared the saddle horses and pack mules for loose herding back to the pack station.

By this time, it was late afternoon and it was still a four hour trip back to the station. He had just turned the last mule loose, when he heard a commotion from his saddle horse. Mogollen was fidgeting around when he stepped on the end of a dead branch which popped up and hit him in the belly, whereupon he set back breaking his tie rope. In those years, breakable grass and cotton ropes were used instead of the currently available nylon ropes. When the rope broke, Mogollen joyfully loped after the loose stock leaving Lou afoot.

Lou wasn’t alarmed yet as the stock had only run to the adjacent meadow and were grazing. Lou thought, “No problem, I can still catch Mogollen”. However, his horse had other ideas and craftily eluded him. Lou then attempted to slip up to one of the gentle dude horses but this proved not so easy, as each dude horse snorted like a bronc, kicked up its heels and ran off just out of reach.

Then George, one of the pack mules, made his move and took charge. George was a cantankerous mule who was known to kick quite accurately at things he didn’t like. As can be imagined he did not get along with very many packers so he was in Lou’s string. One packer observed after a trying day with George, “George wakes up each morning with a new view of his world! “ Lou was not particularly fond of him, didn’t trust him, but he was a reliable, strong pack mule and thought they had developed a somewhat satisfactory working relationship. Among George’s undesirable, sneaky traits was his determination to be the first animal back in the yard by any means available to him. He loved his mule corral and evening hay, knew every trail and short cut along the way and probably had created some of them. His game was to get in front of the packer and “hot foot” it straight home as his night vision was like a cat’s and he never missed a step.

George quickly led the bunch up through a series of little meadows. Lou foot-raced the stock getting between them and the upper meadows to spook them back towards the Purple Lake trail leading to the John Muir Trail. But then he had to race cross country to get in front of them. Still led by George, the horses and mules came at a high trot down a pine tree covered hillside while Lou vainly tried to catch several of the horses as they flew by. As the last horse, Nimbo, trotted down the hill, it was near dusk and Lou knew it was his last chance to catch a mount or have a long hike home. When the big black thoroughbred drew near, Lou launched himself at the horse and caught his bridle. He raced alongside the gelding, hanging onto the bridle, until he slowed Nimbo enough to swing onto the saddle with his last bit of energy. Rounding up several mules who had stopped to graze in the lush meadow, he pushed the herd toward the trail.

George as usual was setting a fast pace and Lou’s errant saddle horse, with his jacket and uneaten lunch tied on the saddle, was near the front of the bunch. With dusk, a chill breeze came up and he looked longingly at his jacket. Reaching some trail switchbacks, Lou, at last, saw his opportunity and jumping off Nimbo, he cut down two switchbacks, caught the surprised Mogollen and jumped up into the saddle. He was able then to maneuver Mogollen to the front of the string of stock. George laid his long ears back as Lou, now leading, slowed the pace and at last was able to pull on his jacket and eat some long awaited lunch. Lou, no doubt, had a few choice words to say to Mogollen as the horse now kept his attention on the trail and his job.

Lou’s goal was to keep a steady and careful speed on the narrow rocky trail and switchbacks, keep the herd in control behind him, and prevent George from cutting in front. The rest of the horses and mules were now content to follow the packer, falling back into their calm trail protocol after their exciting escapade. Cunning George, however, continued his devious attempts.

It was dark when they reached the thicker forest on the north side of rocky Duck Pass, and tricky George knew where his secret trail cut-offs were. About a mile from the pack station, George quietly sneaked off in the dark and gleefully reached the station yard first. He was waiting by the saddle area having a proverbial last mule hee-haw as one tired packer, and the now placid bunch, trotted into the pack station yard. 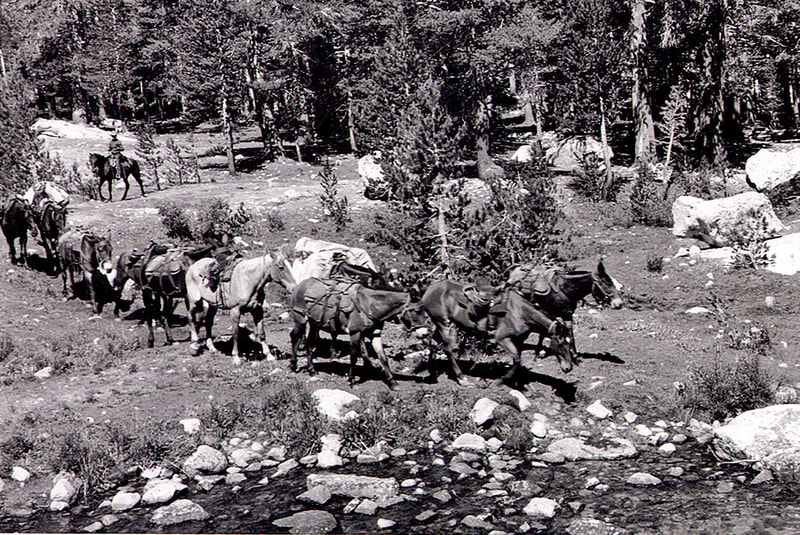 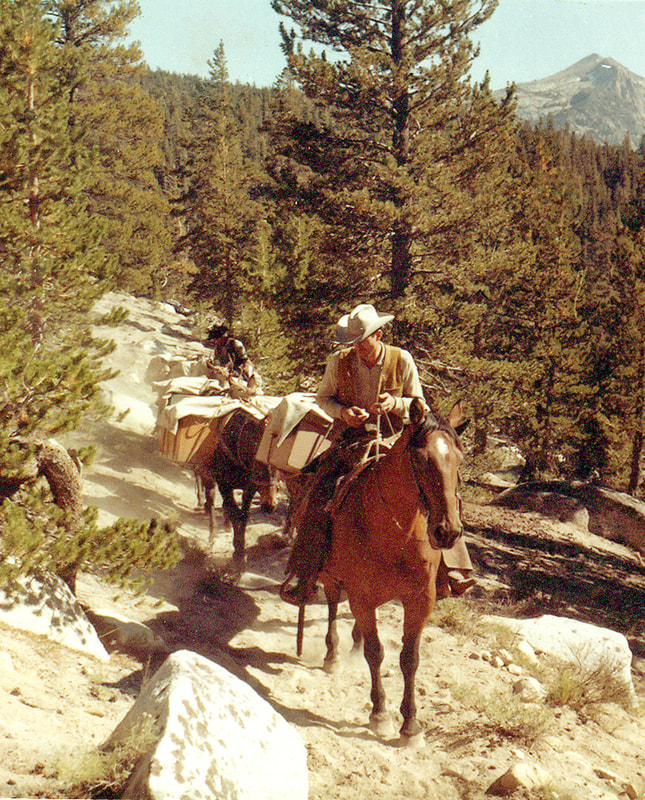 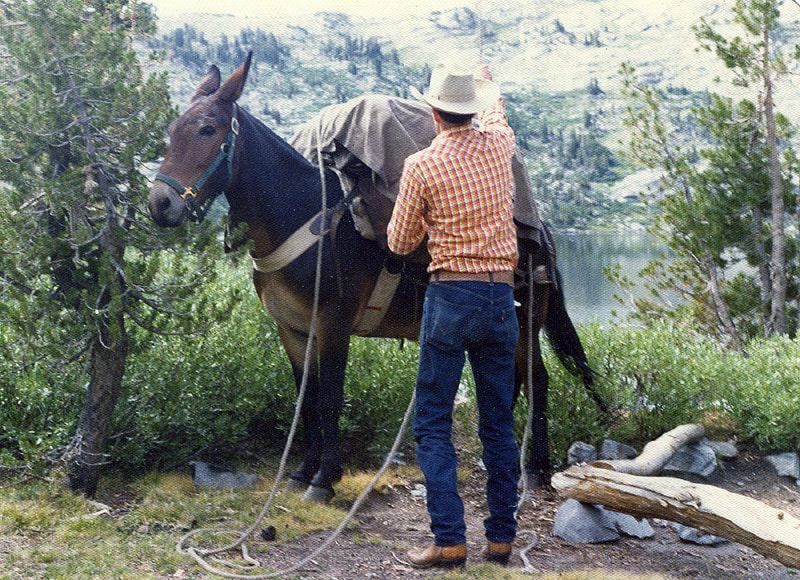