The event centers at the Tri-County Fairgrounds in Bishop, California. Enjoy all the exciting events, participate with your mules, attend the shows and concerts, bring your RV and camp on the Fairgrounds. For more information about Mule Days, go online to MuleDays.org  or call their office.

The American Mule Museum will have a booth at the main entrance kiosk. Join us there, meet other mule fans, exchange stories and become a Founding Member. Volunteer to "man" the booth for a shift.

This collaboration not only helps to enable the display of the wagons in the Mule Capitol of the World, but also recognizes the distinctive relationship between these important history-based organizations. The Laws Museum, dedicated to the preservation of Owens Valley and Eastern Sierra history, and the Death Valley Conservancy, which supports many projects including historic preservation in Death Valley National Park, and the American Mule Museum, champions of the great American Mule, all bring unique and valuable contributions to this partnership.

The soon-to-be completed Laws Museum Exhibit Barn will house the iconic full-scale working reproduction of the Death Valley 20-Mule Team Wagons, that made their debut to an estimated worldwide audience of 40,000,000 viewers at the 2017 Tournament of Roses Parade, and will be the initial focus of these three organizations working together.

The Board of Directors of the American Mule Museum wishes to congratulate the Death Valley Conservancy and the Laws Railroad Museum for their outstanding work in making the Exhibit Barn a reality and looks forward to exciting joint projects in the future.

The American Mule Museum is proud to make this donation and is enthusiastic and prepared to help tell the story at Laws of the great American Mule and its remarkable contribution to the West and the Eastern Sierra.

The Laws Museum is thankful for the American Mule Museum’s generous donation and it continues to seek funding to complete the Barn project.

To make contributions to any of these 501c3 entities to help fulfill their purposes, visit:
www.lawsmuseum.org,   www.dvconservancy.org or   www.mulemuseum.org 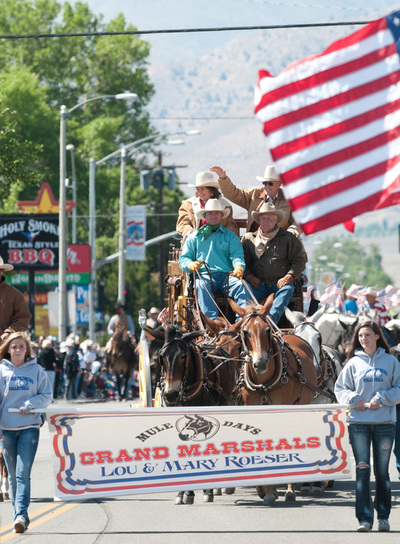 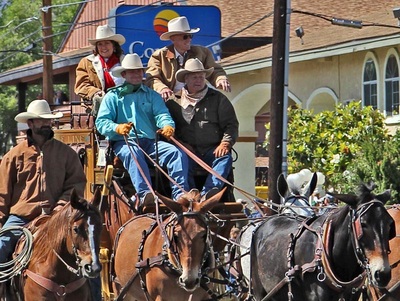 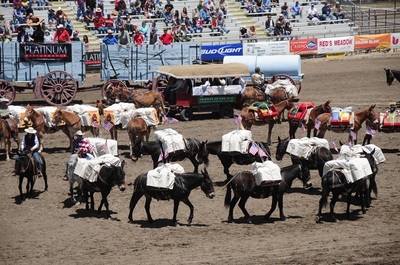 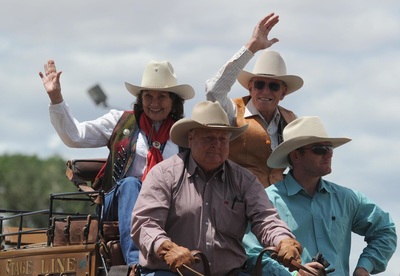 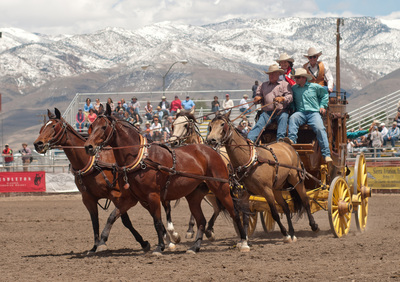 Meredith Hodges
The American Mule Museum would like to take the time to feature one of our most generous donors and friend Meredith Hodges. Meredith has done so much for the Mule community from her Lucky Three Ranch to her character Jasper the mule. We are proud and honored to have Meredith on our team. Meredith’s Bio Meredith Hodges was born in Minneapolis, Minnesota, the daughter of renowned cartoonist and “Peanuts” creator, Charles M. Schulz, and Windy Valley Mule Ranch founder, Joyce Doty. Meredith has been associated with horses all of her life, and with mules since 1973.
In 1980, Meredith moved to Loveland, Colorado, where she started the Lucky Three Mule Ranch, breeding and training a line of mules that were exceptional in their quality and athletic ability, and producing numerous world champions. Meredith’s mules have competed successfully against horses in breed shows and in dressage and combined training, and she trained the first mule ever to reach fourth-level dressage. Meredith also trained the only formal jumping donkey in the world to date that was able to jump four feet in exhibition at Bishop Mule Days in 1991. Meredith is a respected authority as a riding and training instructor, breeder and promoter of mules and donkeys.
Since 1980, she has been an animal inspector, representative and judge for the American Donkey & Mule Society (America’s national mule and donkey organization). Since 1983, she has written the column, “Mule Crossing,” which has appeared in numerous equine publications both nationally and internationally, and has sparked renewed interest in mules and donkeys. Meredith has studied horsemanship with some of the best: Major Anders Lindgren (Swedish Olympic team), Denny Emerson (US Olympic team), Bruce Davidson (US Olympic team), Jim Graham (US Olympic team), Richard Shrake (AQHA Congress judge & international instructor/trainer), Pat Parelli (Natural Horsemanship), and numerous others. Her mules have marched in the 1988 Tournament of Roses parade in Pasadena, California, and in the 53rd Presidential Inaugural parade in Washington, D.C. She was instrumental in getting mules accepted in Dressage by the United States Dressage Federation and by the United States Equestrian Federation.
In 1990, while considering ideas for her “Mule Crossing” column, Meredith came up with the idea to write a letter from a little mule named Jasper who was abused and confused by humans and feature it in her column. She wrote the letter for her column to remind people that animals also have feelings that need to be considered. The letter proved to be a hit and, in honor of her father and inspired by her mother, Meredith went on to produce Jasper: The Story Of A Mule, which sparked a heartwarming series of books and DVDs that continues to captivate children, while introducing them to mules and donkeys in a favorable, educational and entertaining way.
Meredith hopes to open the eyes of the world to the wonderful attributes of these incredible animals, so people can experience the same infectious joy that she has experienced…most commonly called, “Mule Fever.”
We encourage you to visit Meredith’s websites at luckythreeranch.com www.jasperthemule.com www.facebook.com/Meredith-Hodges

LAUREN BON AND THE METABOLIC STUDIO PERFORM ONE HUNDRED MULES WALKING THE LOS ANGELES AQUEDUCT
October 15–November 12, 2013 July 26, 2013
On the centenary of the opening of the Los Angeles Aqueduct, Lauren Bon and the Metabolic Studio will perform One Hundred Mules Walking the Los Angeles Aqueduct, a commemorative artist action to connect Los Angeles to its water source. This performative parade of 100 mules will traverse the 240 miles of pipelines and canals that bring water from the Eastern Sierras through a gravity-fed system to Los Angeles, passing through three counties and nearly 50 communities along the way. Mule power shaped the modern West and was a primary force in constructing the aqueduct, an engineering feat that took only seven years to complete despite the rough terrain. The parade will take nearly a month, with public events planned in Bishop, Manzanar, the Owens Dry Lake Bed, Pine Canyon, Neenach, The Cascades, Hansen Dam, and Griffith Park. It will culminate in a Veterans Day Parade down Western Avenue in Glendale to welcome the mules into the City of Los Angeles on November 11, 2013, followed by a ceremony at the Equidome to celebrate our country’s equine labor force—the mule. This commemorative action is a prelude to Bending the Los Angeles River Back into the City, a work that will pierce the concrete jacket of the Los Angeles River and use a sixty-foot waterwheel to reconnect the land to the river that originally supplied water to the city. One Hundred Mules Walking the Los Angeles Aqueduct is an action with a resolution to move forward into the next hundred years with renewed appreciation for this vital resource: Let it be resolved that the citizens of Los Angeles will do better at utilizing this life-giving resource in the next one hundred years! This action is coordinated with the support of the Los Angeles Department of Water and Power (LADWP) that has itself been working to make a new century of water delivery happen. About the Metabolic Studio: The Metabolic Studio was formed in 2009 to support the signature projects of Lauren Bon’s artistic practice. The studio team also directs philanthropic support to the people, places, and projects that underpin the long-term goals of Ms. Bon’s work. For additional information, contact Michele Urton at press@metabolicstudio.org or 213-300-6775.

Photos from collections of the Laws Museum, Eastern California Museum, Los Angeles Dept. of Water and Power, Southern California Edison Company, Mule Days, National Park Service, Forest Service, Russ and Anne Johnson, local personal family collections and memoirs were used to document the mule who made it all possible. These themes and more will be carried through in the Museum itself.

The Museum is currently planning construction of further kiosks at the Laws Railroad Museum just outside of Bishop, and the Bishop Area Chamber of Commerce located on Main Street in downtown Bishop.

A grant from HUD, membership dues, donations, Alpine Signs, and hard work by the volunteers has made these projects possible. Visit these kiosk panels when you are in Bishop and learn more about the humble mule than you ever imagined. 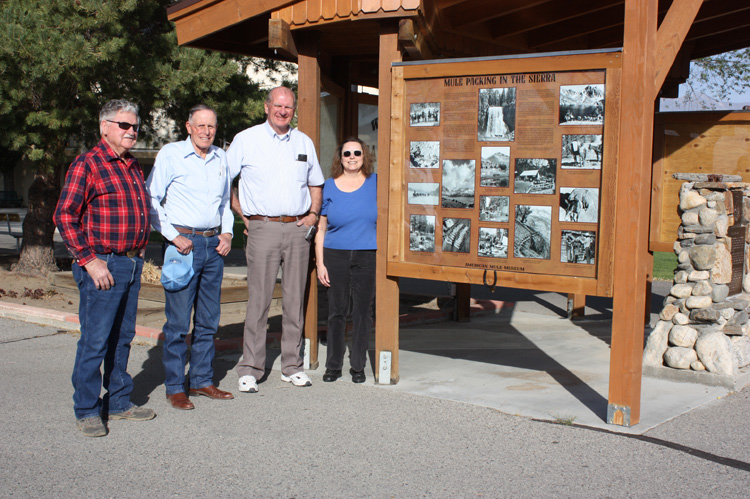 2017 AMM Giving Tuesday Unselfies
Check out the "unselfies" below from some of our donors.  Click photos for larger views. 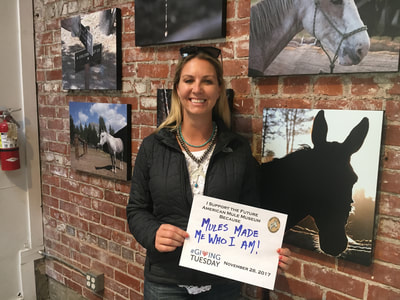 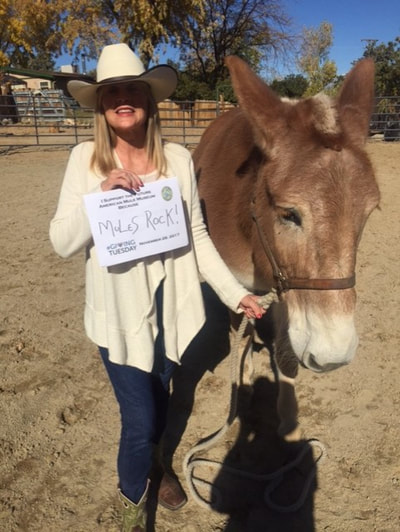 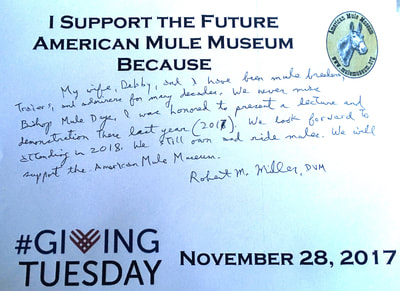 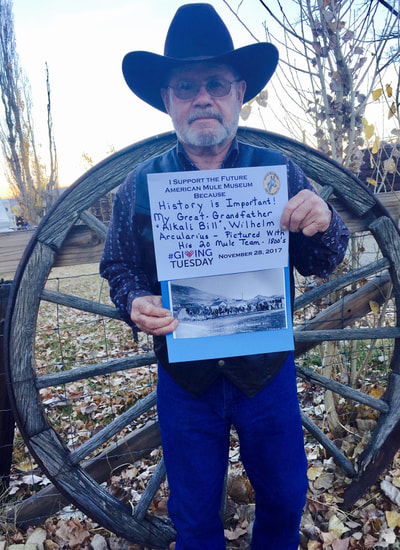 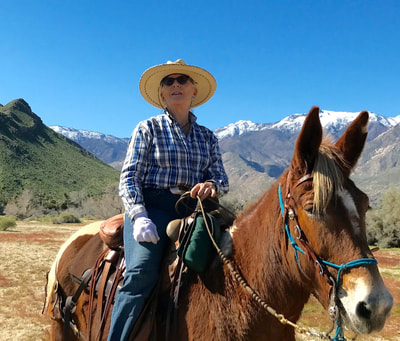 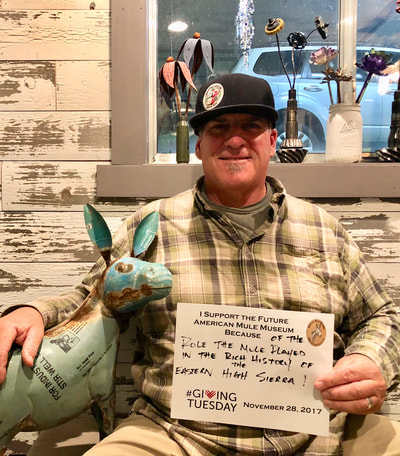 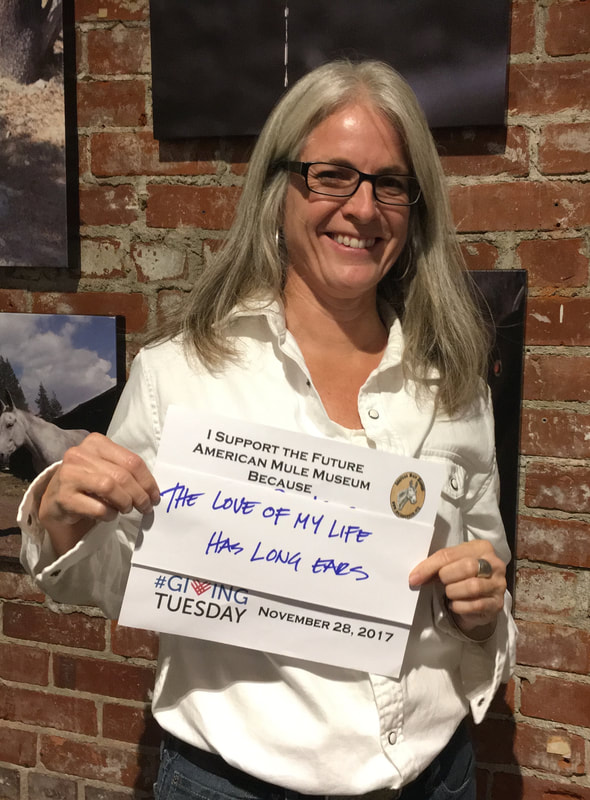 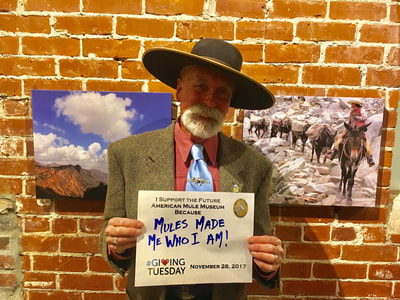 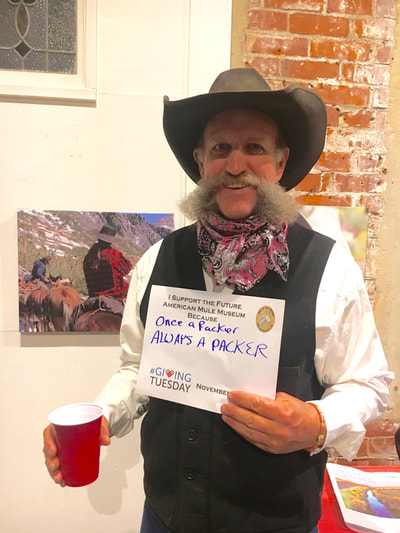 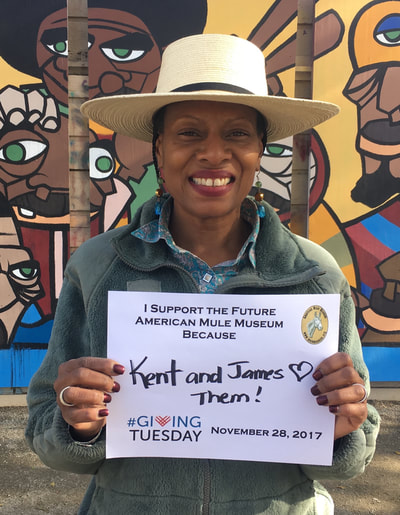 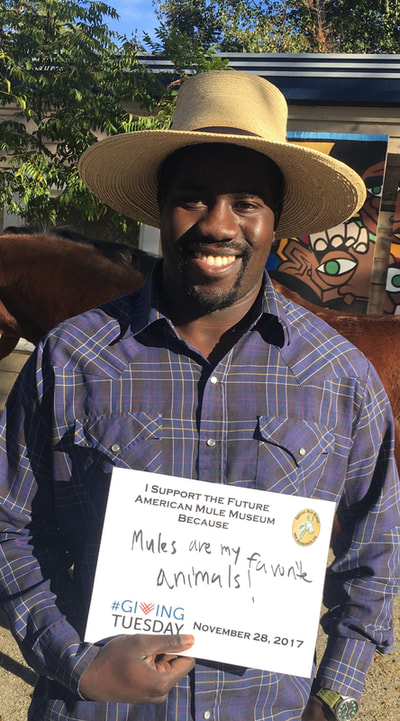 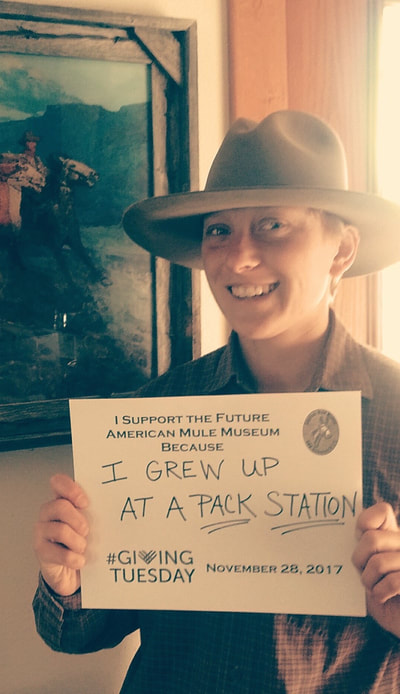 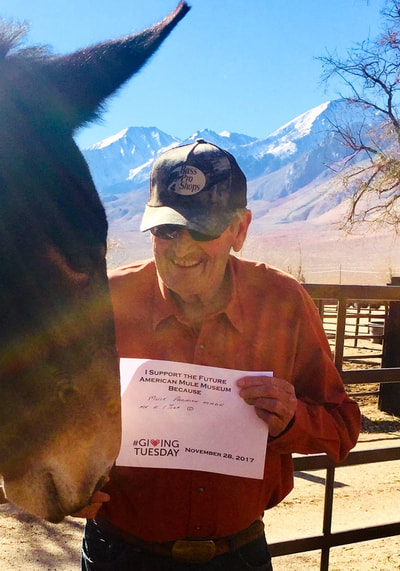 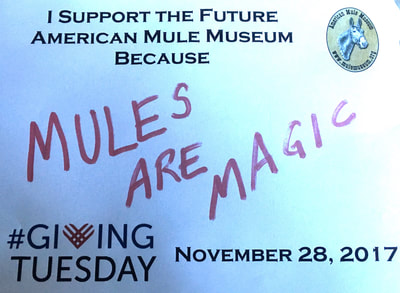 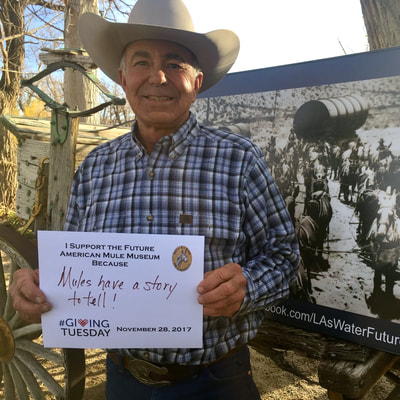 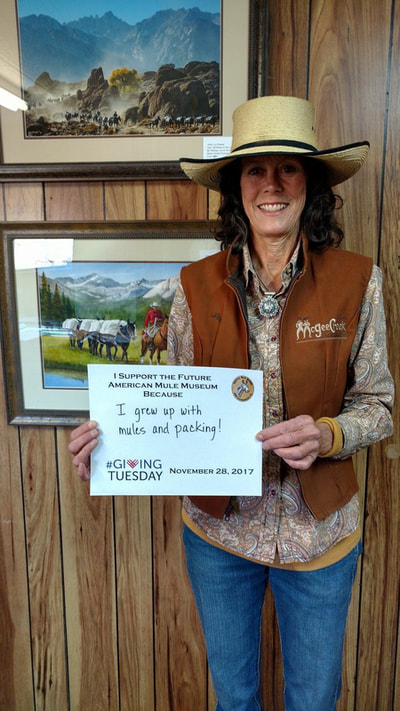 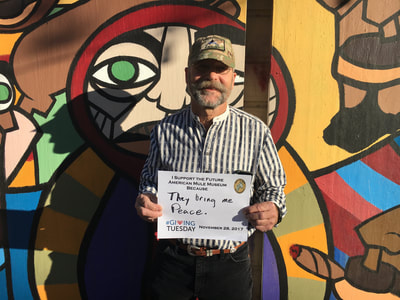 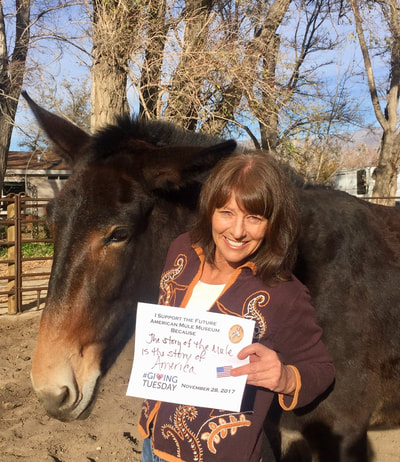 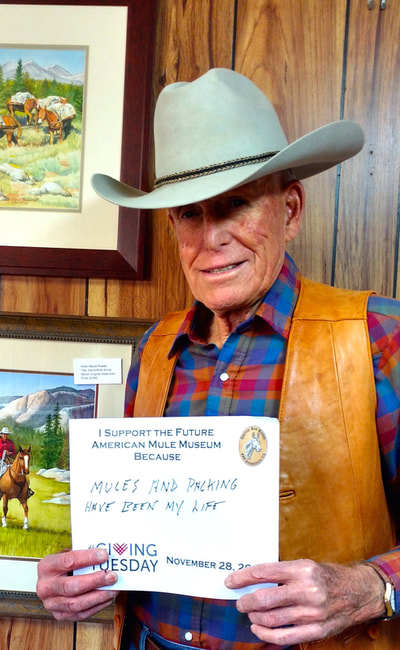 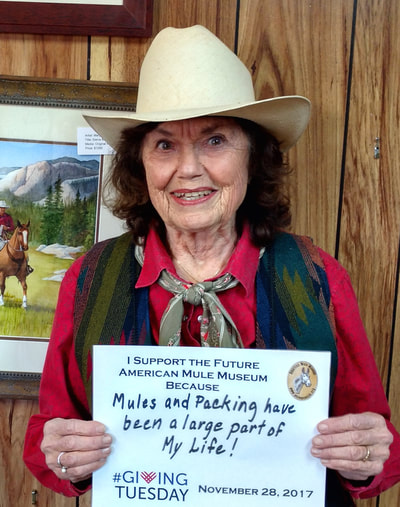 When we first started talking about #GivingTuesday we thought $5,000 would be a good goal to shoot for. Board president, Bob Felkel, however thought we should really go for it and have a stretch goal of $10,000. Turns out he had a pretty good sense of how generous all of you are! There are still a few checks coming in, but as of right now we have raised $11,695.50. We don't know how much matching funds we'll be getting from the Bill & Melinda Gates Foundation -- we read the matching funds were snapped up in 7 to 15 minutes -- but we're confident some of that will be coming our way (thank you, 5 a.m. donors!). So we're guesstimating the final total will be around $15,000. That is a whopping 50 percent over our audacious $10k goal!
None of that would have happened without your donations and fantastic social media networking -- the number of shares and likes was extraordinary. We are so very grateful to you all.
In January we hope to have some exciting news to share regarding our progress in "Telling the Story of How the West Was Built -- One Mule at a Time!" For now, though, rest assured we are working diligently behind the scenes to fulfill our mission, "to protect and preserve the legacy of the American mule for generations to come by illuminating the critical role mules played in building the American West."
American Mule Museum
PO Box 395
Bishop, CA 93515
info@mulemuseum.org